A growing number of people want to live in Ann Arbor, but the city’s zoning code limits space for new homes and stores. This scarcity makes housing and commercial space expensive. Expensive real estate prices encourage developers to build at the outskirts of the city where land is cheaper. These developments replace forests and fields and increase traffic.

City council’s challenge is to create more space for people to live within the city while respecting the rights of existing residents. I propose three methods for doing this. None of them threaten residential neighborhoods. They only affect commercial corridors and neighborhoods where nearby property owners consent to changes.

Two of these methods depend on “internally buffered districts,” which are part of a new zoning method I have developed. In 2015,  I wrote a paper explaining this method, and The Real Estate Law Journal published it.

A zoning code creates different rules for different parts of the city. Various buildings and activities are allowed in some districts but not others. A zoning code consists of two documents: an ordinance and a map.  The ordinance lists the rules for each zoning district. The map shows where the districts are.

Ann Arbor has relaxed zoning rules for older parts of town. These areas developed before zoning existed. Apartments, stores, and houses, are all allowed next to each other. However, many newer areas have exclusionary zoning, where small lots, stores, and homes for multiple families are illegal. William Fischel’s history of zoning summarizes why these rules exist. Exclusionary zoning causes many problems nationally and in Ann Arbor:

It raises the cost of living.

Density restrictions limit the amount of people that can live within the city. For example, In the R1A district, every lot must be at least half an acre. These rules makes housing more expensive and cause income and racial segregation.  I discuss density restrictions on my affordable housing page.

It damages the environment.

It does not separate residents from disruptive developments .

Currently, the city has a patchwork of commercial and industrial zones. In these districts, the same standards usually apply to developments regardless of where they are within the district. For example, in the D1, zone, tall buildings are allowed even when they are next to R (residential) districts. This means that high-rises, like the controversial 413 East Huron building,  can be built next to residential neighborhoods. 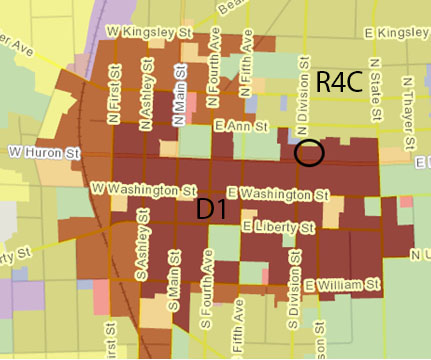 In zoning jargon, this is called a buffering problem. City council’s usual response to buffering problems is to make small changes to small areas after controversial developments. I propose an alternative method farther down this page, using a technique called an internally buffered district. It would comprehensively separate residential neighborhoods from dense development, but also create more living space far away from residential districts.

Economists and urban planners have criticized exclusionary zoning for decades. Jane Jacob’s The Death and Life of American Cities is probably the most famous critique.  Even dry legal textbooks like Land use Planning and Development Regulation Law argue against exclusionary zoning.

It is not just academics who are critical of exclusionary zoning. The National Association of Realtors’ survey suggests that most people want to live in mixed-use areas, which typical zoning codes do not allow.  These mixed neighborhoods exist in older parts of Ann Arbor, as well as in other countries with mixed use zoning systems.

However, efforts to end exclusionary zoning are controversial. Every small change to the zoning map threatens to erase the privileges of people living nearby. Most people don’t want their neighborhood singled out as a place for new development, which is understandable. That is why the changes I propose do not affect residential neighborhoods, unless the residents there request changes.

Rezone commercial, industrial, and office zones to Buffered Mixed Use.

The city should create a new internally buffered district, called “Buffered Mixed Use.” The activities allowed in this district would vary depending on their location within the district. For example, a tall building would be permitted at the center of the district, but not at the edges near a residential zone. The disruptive effects of new development would be contained within the zone and would not affect people outside of it.

This new district could replace the patchwork of commercial and industrial zones in the city. This would create more buildable space at the center of commercial corridors, but it would also prevent dense development near residential neighborhoods.

This district could be the city’s default option when rezoning abandoned lots, or city-owned parcels that are being sold. For example:

Allow property owners to rezone their properties to Buffered Mixed Use.

The city should amend its master plan to recommend the following: When property owners request that their property be rezoned to Buffered Mixed Use, the request should be granted. This would not threaten residential neighborhoods, because Buffered Mixed Use districts only allow dense development far from residential areas. For example:

Parking requirements cause many harms, and the city should eliminate them. Many other cities are scaling back their parking requirements, and Buffalo, New York may soon get rid of them entirely. To make sure that current residents can still find parking, the city should allow residents to request neighborhood parking districts, which would reserve roughly half of the on-street spaces for nearby property owners.