Rather than encourage a small number of people to use less energy, the city should remove restrictions that compel tens of thousands of people to use more energy. These changes would make Ann Arbor a model for other cities trying to cut emissions. They would also make it easier for residents to adjust to energy price increases caused by scarcity or government intervention.

The Need for Action

The International Panel on Climate Change has stated that worldwide emissions must be reduced by 41-72% by 2050, or else global surface temperatures could increase by more than two degrees celsius. Warming above this level could cause mass extinctions, crop failures, and other risks.

Global emissions in 2010 equaled about 46 billion metric tons  of carbon dioxide equivalent.  Of this total, about 16% was generated in the U.S, and 0.004% in Ann Arbor. Clearly, Ann Arbor cannot slow global warming by itself, but there are still reasons to reduce emissions within the city.

First, Ann Arbor could became a model for other municipalities. If the city reduces emissions in an innovative way, then other governments might imitate it. If dozens of cities imitated Ann Arbor’s policies, global warming might slow by a non-negligible amount.

Second, there is a chance that the State or Federal government will force emission reductions in the near future.  Many other countries already have carbon taxes, and the United States may follow. The State of Michigan might increase the  renewal energy standard, which would force energy companies to reduce fossil fuel use, which would likely raise energy costs. It is also possible that natural shocks, such as an oil shortage, could increase energy prices.  It will be easier for residents to adjust to these shocks if the city makes it easier to use less energy.

Consider a family that lives in suburban Detroit. Perhaps they live in a large house and drive frequently. If the family moves to Ann Arbor, where they drive less and live in a smaller house, emissions will increase in Ann Arbor, but decrease by a greater amount in their hometown. This shift would decrease the total amount of carbon in the atmosphere. The city should not try to prevent this shift, but instead encourage it.

About 2.2 million metric tons of carbon dioxide equivalent was produced in Ann Arbor in 2010. This is a slight increase from 2000. Per capita emissions are 19 tons per year, which is slightly lower than the United States average of 21 tons (6,742 million tons/319 million people). 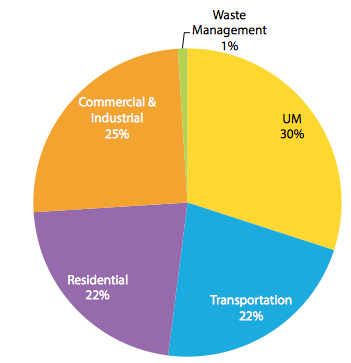 Prior to 1996, methane emissions from landfills were also a sizable source of emissions. That year, the city began capturing methane and carbon dioxide from the city landfill, which reduced emissions by about 3% a year.

The city’s current emissions efforts are small. The mayor’s 2015 update and an Mlive article mention several ongoing programs, such as the PACE program and mandatory energy benchmarking.

The city loans money to property owners for energy efficiency upgrades. The climate plan suggests that this could eventually reduce annual emissions by 14,846 tons (0.7% of total emissions), but it has so far affected only a few properties.

Mandatory energy benchmarking would require the owners of apartment buildings and commercial spaces to report the amount of energy they use. This could encourage some number of property owners to voluntarily use less energy. However, the property owners who could save money by using less energy already have a reason to analyze their own energy statistics.  The benchmark will affect the owners who have not felt compelled to audit themselves, and these owners are probably the least likely to profit from reducing their energy use.

The climate plan lists many ways that the city can reduce emissions. However, many of the proposals are out of the city’s control. For example, actions EB20-EB23 depend on DTE using more renewable energy. These actions are supposed to cause an annual reduction 311,572 tons, or 14% of Ann Arbor emissions. The city cannot compel DTE to make these changes. It seems more reasonable to focus on changes that the city has control over, such as zoning and land use.

The climate plan supports zoning reforms to allow increased population density, but city council has not made any such changes. It may soon do the opposite by decreasing height limits in parts of the downtown without removing any density restrictions. Zoning reform is difficult to achieve politically, because property owners often resist changes that allow more people to live near them. This kind of opposition has been common throughout the United States since zoning began in the 1910’s. I suggest a few ways to reform the zoning code without upsetting nearby residents on my zoning reform page.

City council can greatly reduce electricity consumption by reforming zoning rules to allow more people to live in the same amount of space.

First, it could allow more people to live in each house or apartment. Rules for the R1-R3 districts prohibit more than four people from living in a single dwelling unit, unless they meet the city’s definition of family. This would allow people to reduce energy use by sharing heat and light. This change would not affect fire and building codes. These codes come from the state government and exist separately from zoning.

Second, it could allow apartments in areas where they are now illegal. Apartments use about half as much energy per household as single family houses, but they are forbidden in the R1 and R2 districts that cover most of Ann Arbor.

Third, it could reduce or eliminate minimum lot size requirements. This would allow smaller houses on smaller lots, which use less energy than larger homes.

Fourth, it could allow taller buildings. This would create more space for apartments with many units, which are especially energy efficient. Raising height limits would be very controversial, but it might be less so if residents could opt-in to a neighborhood mixed use district, where tall buildings are only allowed at the center of the district. Alternatively, the city could adopt a variable height limit for the downtown, where taller buildings are allowed in the center of downtown, but not at the edges.

Allowing more people to live in Ann Arbor would probably reduce total emissions. Many people moving to Washtenaw County come from Michigan suburbs, where emissions are about twice as high as in central Ann Arbor. A map from the University of Berkeley shows that urban centers have much lower emissions than other areas. A movement of people from suburbs to urban centers could greatly reduce emissions.

The city government currently subsidizes driving with minimum parking requirements and unprofitable parking structures. The city can reduce vehicle traffic and transportation emissions by eliminating these subsidies. The city can also make it easier for residents to walk to destinations by allowing stores and residences to intermingle.

Currently, property owners are required to have a certain number of parking spaces. These requirements increase the supply of parking and decrease the supply of other land uses. This increases traffic and transportation emissions, because the amount of driving is is tightly linked to the amount of free parking available. Parking minimums also decrease the amount of space on each lot available for building, which discourages compact building patterns. Urban economists have condemned minimum parking requirements for these and other reasons. I discuss parking minimums in more detail here.

It is also possible to cut car emissions by removing use restrictions that keep land uses segregated. In many parts of Ann Arbor, only residential uses are allowed. These policies tend to spread destinations apart and increase driving.

The size of reductions will partly depend on the amount of people who move to the city as a result of zoning reform.  County data gives a rough sense of how many people might live within the city limits if zoning changes created more buildable space.

Washtenaw county grew by 22,000 people between 2000 and 2010, but Ann Arbor’s population stayed the same. It is reasonable to assume that some of the people moving to new subdivisions just outside the city would instead move to Ann Arbor if there was more housing available here.

As the Berkeley map shows, emissions are about twice as high in nearby suburbs as in central Ann Arbor. If 22,000 more people move to Washtenaw County in the next ten years, and half of them move into walkable neighborhoods within Ann Arbor instead of suburbs, then emissions would go down by about 330,000 tons (11,000 people x 30 tons) , or 15% of current emissions within Ann Arbor. Removing parking minimums and selling city surface lots would have additional effects, but it is hard to know how large these would be.

Total reductions could be greater or smaller depending on the size of the population increase within Ann Arbor and the extent of reforms. Even if growth within the city is small due to regional trends, Ann Arbor could be a model for cities in parts of the country that are growing faster. This would be an improvement over the city’s current programs, which have a tiny effect on emissions.