If the city does not reform its zoning code, many of the remaining open spaces around Ann Arbor will become strip malls and subdivisions. The Greenbelt will not affect enough land to stop this.

Ann Arbor passed its first zoning ordinance in 1923.  A 1925 insurance map shows that the city was only a little bigger than our current downtown. Every home was within walking distance of farmland.

Here are the 1925 city limits drawn over a current photo: 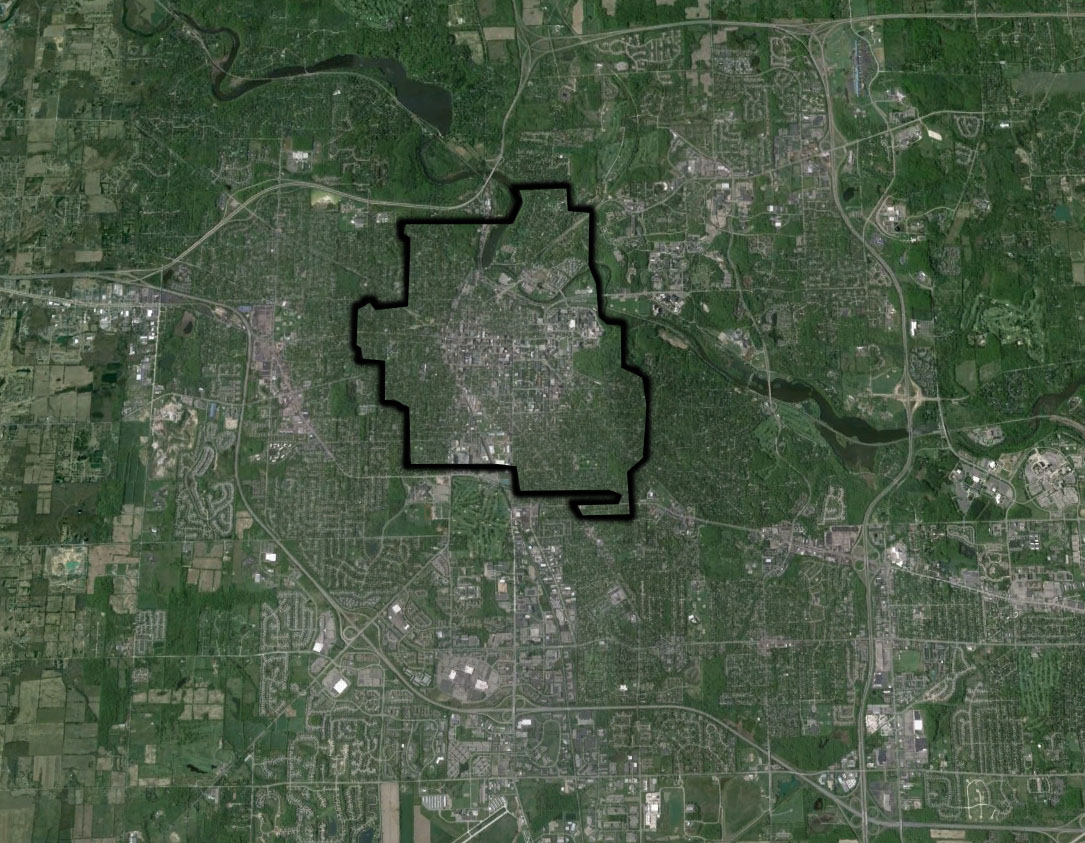 This area is still more densely populated than its surroundings, because when cities adopt new zoning codes, they often draw the districts so that existing activities are permitted. This keeps cities from having to grandfather in existing land uses that violate the code. For this reason, old cities like Ann Arbor have high-density zoning in areas that developed before the 1920’s. 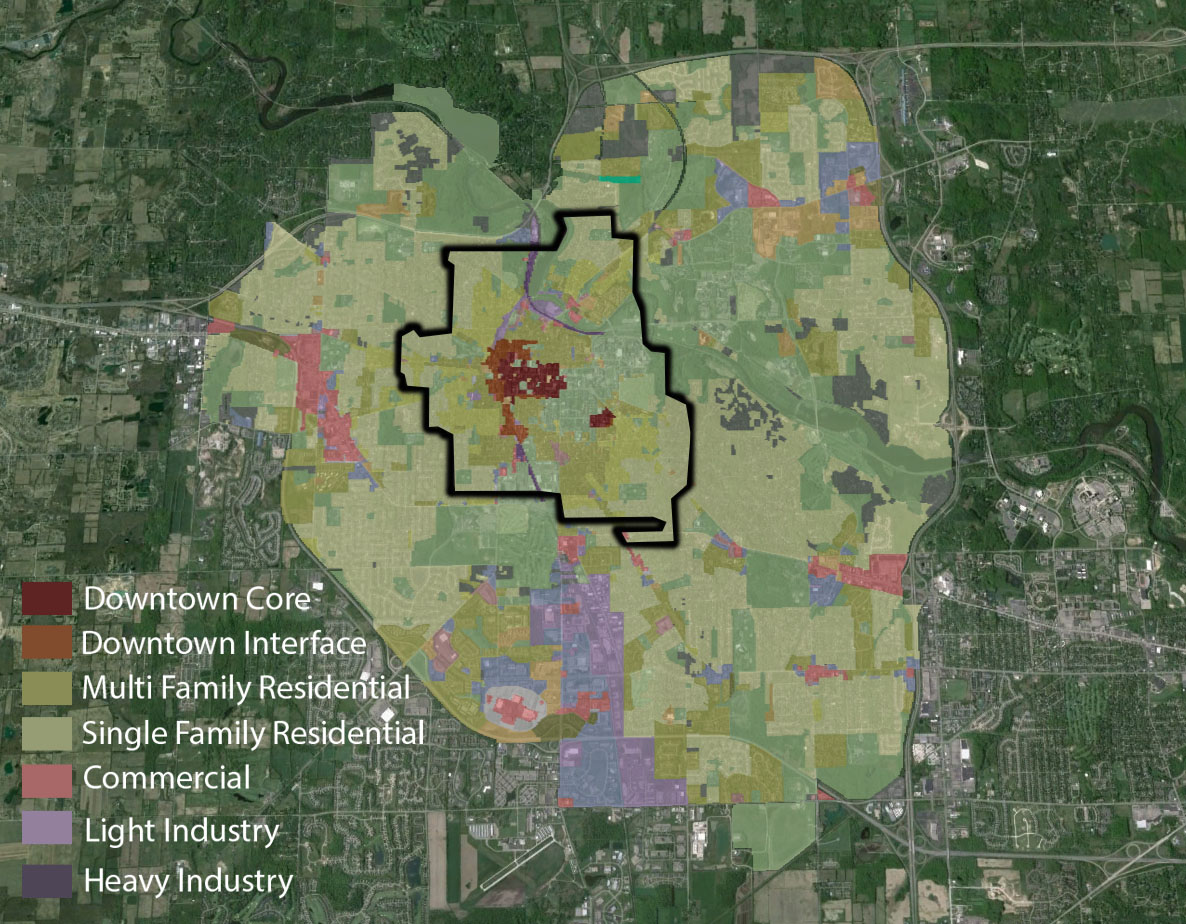 New development has mostly been single family houses broken up by low-density commercial corridors like Stadium, South Industrial, and Plymouth. There have also been new condo developments at the edge of the city. Outside of the downtown, there has been little intensification of already built-up areas. This is because of zoning rules that prohibit high and medium-density housing.

These rules exist for political reasons. Existing residents often dislike new developments that occur nearby, which is understandable. They pressure the city to make restrictive zoning rules that forbid new apartments and stores from locating near them. In many places, the only remaining legal uses are single family homes on large lots, or low-density strip malls. This tendency has been common throughout the united states since zoning began in the 1910’s.

This explains why Ann Arbor’s growth since the 1920’s has mostly been an expansion outward. There has also been new construction in the downtown, but there is a limited amount of space left. As the amount of downtown space dwindles, the outward expansion will probably accelerate.

In 2003, voters approved a .5 mil tax to buy the development rights to open spaces surrounding the city. The greenbelt has conserved many acres of land, but it does not include enough land to stop subdivisions from spreading outward. 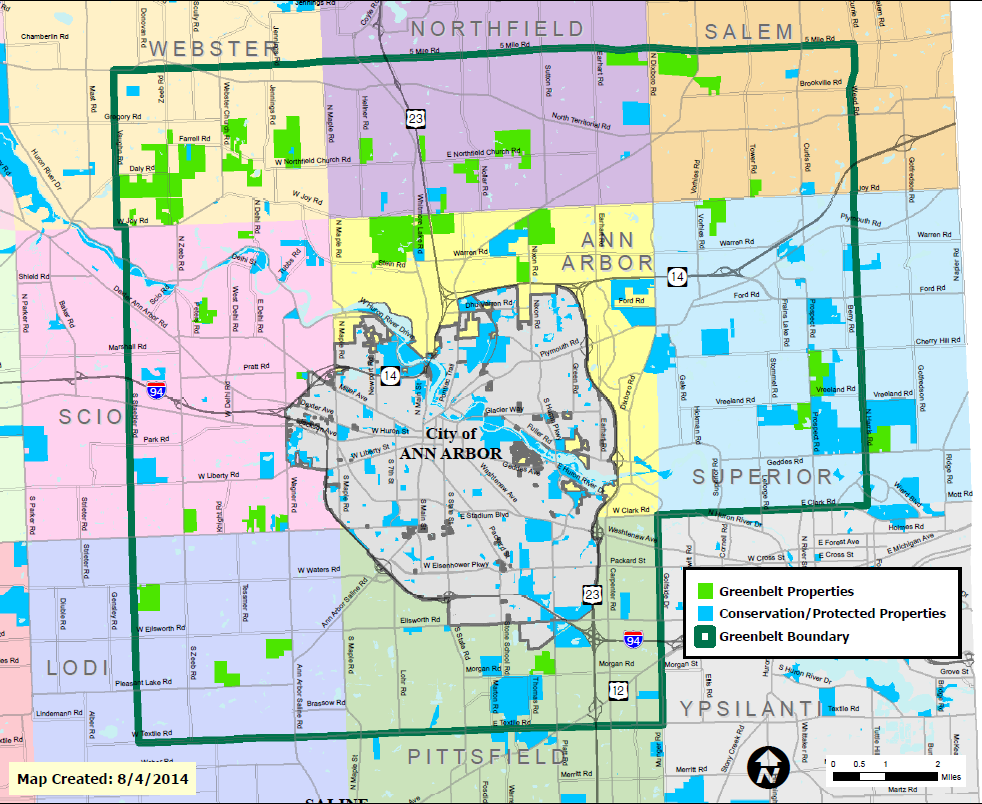 A more aggressive program could preserve more land, but with current zoning restrictions, such a program would severely restrict the supply of housing. Housing costs in Ann Arbor are already higher than in nearby townships, but they would be even higher if developers did not respond to demand by building at the outskirts of the city. Preventing this development without changing zoning rules would gradually turn Ann Arbor into an enclave for the rich.

Between 2000 and 2010, Washtenaw County’s population increased by 22,021, but Ann Arbor’s population decreased by 90. Most new development is happening in the townships surrounding the city.

Advertisements for these developments emphasize how close they are to Ann Arbor. A website for “The Ravines” states “Residents pay lower Scio Township taxes but benefit from city water & utilities and by sending their children to Ann Arbor Schools.” The same page later claims:

Located in popular Ann Arbor and offers great access to the expressway to get to Detroit or beyond quickly. A hop skip and a jump away is Zingerman’s Deli, Kerrytown, Kerrytown Farmers Market, U of M campus, Medical Center and University of Michigan football games.

It is clear that the developers are responding to demand for housing in Ann Arbor. If more people were allowed to live in already developed parts of the city, there would be less demand for new subdivisions on the outskirts of the town. I suggest methods for making this possible without disrupting existing residential neighborhoods on my zoning reform page.