There is a high demand for homes in Ann Arbor, but limited supply. This causes high housing prices. Supply is limited because the city’s zoning code restricts the number of dwellings that can be built within the city. For example, in many parts of the city, only single family homes on large lots are allowed. This is called exclusionary zoning, which is common in American suburbs. This kind of zoning causes several problems:

City council’s challenge is to allow the supply of housing to increase in a way that is acceptable to existing residents. I suggest three methods for doing this on my zoning reform page. None of them disrupt existing residential neighborhoods. These changes would have a larger impact than the city’s current programs, which transfer small amounts of wealth, but do not fix the housing shortage.

To help people afford housing, the city must do one or both of these things:

The city’s current programs transfer wealth. For example, the city gives money to the private charity Avalon Housing,  which buys homes on the private market and then rents them to people with disabilities at cheap rates. This transfers wealth to people who need it, but it does not affect the market price of housing.

On the other hand, the city’s land use regulations affect housing prices. The city’s zoning code limits the number of people living in each dwelling, the number of dwellings on each lot, and the number of lots on each acre. There is  evidence that density restrictions like these are a major cause of high housing costs nationally, which I discuss below.

The city gives a small amount of funding to the Ann Arbor Housing Commission and private housing charities. The Housing Commission is an independent agency that receives most of its money from the federal government. It operates  359 subsidized housing units in 18 locations, and gives out about 1,300  housing vouchers each year. Most of the vouchers are tenant based, which means that they can be used to rent homes on the private market. In 2014, the city contributed $269,000 (1.7%) of the commission’s $15.5 million budget.

The city also gives a few hundred thousand dollars a year to Avalon Housing and other nonprofits as part of its human services budget. Additionally, The Downtown Development Authority must budget at least $300,000 a year for subsidized housing. Some of the DDA’s funding goes to the Housing Commission, and some goes to private charities.

Together, the city’s wealth transfers amount to roughly half a million a year. This is a tiny amount of money compared to the need for affordable housing and the federal government’s support for the housing commission. To make a larger impact, the city would need to transfer wealth on a much larger scale. It would be difficult to get voters to support such a change.

To spend millions of dollars a year on wealth transfers, city council would need to either make large permanent spending cuts or raise taxes. There is anecdotal and theoretical evidence that voters won’t agree to this kind of redistribution.

My anecdotal evidence comes from going door to door and talking to people who have voted in recent elections. Many people tell me that Ann Arbor taxes are too high relative to city services. I don’t think most people would vote to increase their taxes without getting more services in return.

Models of local government spending also suggest that this kind of redistribution is not possible. The Tiebout Model claims that people can choose how much they want to spend on local public goods by moving to communities that match their preferences. Local governments can’t just extract money from wealthy residents, because these  residents can move to other communities with lower taxes. This is especially true when there are lots of political jurisdictions near each other, like in Washtenaw County. If Ann Arbor passed an income tax on very wealthy people, over time, these people would tend to change their legal residence to a nearby township. Wealth redistribution is easier at higher levels of government.

Unlike wealth transfers, reforming density controls would make housing cheaper for everyone, including people who do not qualify for vouchers and people who do not want to go through the commission’s screening process.

The city can lower housing costs by relaxing density controls.

In areas with plenty of buildable space, the cost of housing is usually close to the cost of construction. When housing is more expensive than the cost of building new homes, developers  build new dwellings and profit. After construction, there is temporarily more housing than buyers, and sellers have to lower their prices to attract new buyers. Prices fall until it is no longer worth it for developers to build new homes. Then construction stops.

Density controls disrupt this process. When prices are high, developers want to keep building, but they cannot because there is no more buildable space. Instead, development occurs on the outskirts of the city. Suburban homes bring down prices a little, but they are not perfect substitutes for homes within the city, so a price difference remains. Data from Zillow shows that average rental prices are much higher in Ann Arbor than in nearby areas that are less crowded.

When students leave Ann Arbor in the summer, demand goes down, and prices drop temporarily. Allowing the supply of housing to increase would also lower prices, and the effect would last throughout the year. I suggest three ways to do this on my zoning reform page. None of them disrupt existing residential neighborhoods, unless the residents there request changes.

There is evidence that density restrictions are a major cause of high housing prices nationally.

If the cost of housing was lower, federal and local agencies could provide vouchers and supportive housing for more people. According to Jennifer Hall, the executive director of the Housing Commission, the commission does not have enough money to fund as many vouchers as it legally could. If the market price of housing continues to increase, it will have to give out even fewer vouchers.

Zoning reform would allow the commission to give out more vouchers. This would probably be more effective than increasing the city’s transfers. Even if the city increases its transfers substantially, it will still be very small compared to the federal government’s contribution. Cheaper housing would make the largest source of funding, federal money, more effective.

This is important, because there are many low income people who cannot get vouchers currently. The waitlist for vouchers opened most recently in August 2012, and about 15,500 households applied in a few days.

Zoning reform could increase property values by allowing people to use their property for more purposes. Imagine a group of property owners in a single family zone. Suppose the property owners successfully ask for a zoning change, and suddenly each property can hold three dwellings instead of one. This change would have two effects on real estate prices:

Property owners would get more buildable space, but the price of space would go down. The overall effect would probably be good for property owners in the city, because Ann Arbor is only one part of a regional housing market. Any increase in the amount of space locally would probably only have a moderate effect on the cost of space throughout the region.

For example, suppose property owners gained three times as much buildable space as before. Even if the price of space went down by 50%, land values would still go up within the city. Outside the city, land values would go down, and more forests and fields would be conserved.  I suggest how the city could create more buildable space, without threatening existing residential neighborhoods, on my zoning reform page.

When the new expensive building has more units than the old cheap one, the second effect is larger. There are more satisfied wealthy people than destroyed cheap units. The net effect is lower housing prices.

City council does not have the power to stop developers from replacing old cheap units with new expensive ones. However, it does regulate how many units are allowed on each parcel of land. If city council tightened these regulations, developers would still build new expensive units, but they would first have to destroy more cheap units. This would raise prices throughout the city. If instead, city council allowed more units to be built, there would be enough space for cheap and expensive units to co-exist.

New buildings tend to be more expensive than older buildings for the same reasons that new cars and other products are more expensive than older versions: They tend to be in better condition and need less maintenance. This means that if the city tried to stop the construction of relatively expensive buildings, it would have  to stop construction altogether. This would cause a permanent housing shortage, which already exists in some cities and exclusionary suburbs. Real estate data from Trulia shows that the technology hubs with the least new construction tend to have the highest costs. 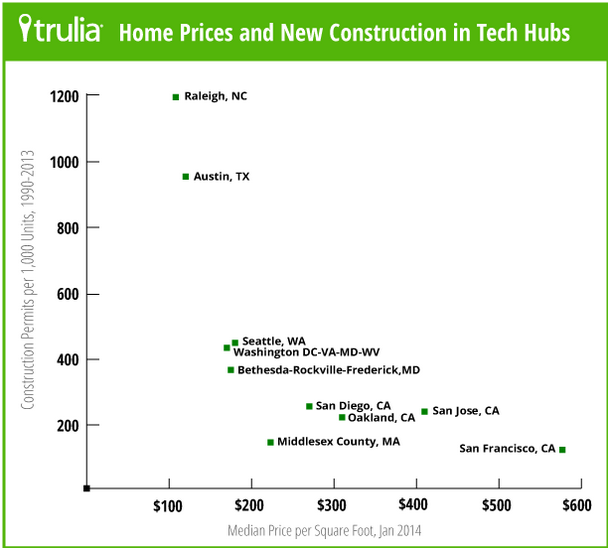 It will often appear that new construction causes high housing prices, because developers react to high prices by building more units. This creates the illusion that new buildings are a cause of higher prices, when in fact they are an effect.

Don’t new buildings give other landlords an excuse to raise rents?

If a developer builds a fancy new student high-rise with bedrooms that cost $1,000 a month, nearby landlords can charge more money for their apartments.

Consider the example above. The nearby landlords could have charged more rent before the developer built the high-rise. The high-rise didn’t create more students demanding housing, so why didn’t the landlords raise their rents before? Maybe they just didn’t know that tenants would pay higher prices. They needed an example from a leader, like the high-rise landlord.

Despite these holes, this argument is attractive because it explains why housing prices can still be high after new construction. To me, there is a better explanation: If demand is strong, a small increase in supply will not stop rents from increasing. It will only slow the increase.

Why hasn’t recent construction lowered the cost of housing?

A common argument is that if an increase in supply makes housing more affordable, then the recent construction downtown should have made housing costs go down in Ann Arbor. This is unreasonable for two reasons:

Another argument is that If new buildings bring in people and jobs, then even more people will be attracted to Ann Arbor, which will cancel out the effects of new construction. If people attract more people, then building more housing will never bring down prices.

However, people do not always attract more people. If they did, every city and town would gain residents simultaneously, which is impossible. Clearly there are other factors that determine why people move, like family ties, weather, and regional job markets. More people and activity in Ann Arbor might make it more popular, but demand is not unlimited. It is possible to have cheaper housing without a massive influx of residents.

There are more arguments about supply and demand on  Michael Lewyn’s blog. Lewyn is a real estate lawyer who writes about land use and city planning.